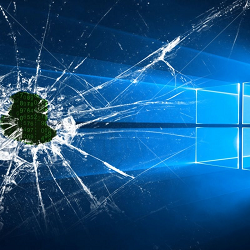 It’s not an issue Windows 7 users had to worry about, but for Windows 10, a broken search bar has been reality for a while now.

In one of the many live updates Microsoft forces to Windows 10, one update managed to break the local hard drive search feature. It simply displayed a white box in place of where the search feature has always been. It seems that Microsoft has finally gotten around to fixing the problem. From BBC:

“This issue has been resolved for most users and in some cases you may need to reboot your machine,” it said.

The Windows 10 operating system has 800 million users worldwide. Microsoft did not say how many users were impacted by the problem.

The tool is one of Windows’ most used facilities, and normally makes it easy for users to find files, apps, emails and other content stored on their computer. However, while it was down users were shown only a large grey box.

“The taskbar search doesn’t work for me now, I have to scroll up and down the start menu like an animal,” tweeted one frustrated user.

This is far from the first time we’ve seen Windows 10 updates breaking things on the operating system. Last month, we saw an update bricking some computers. In retrospect, a broken search feature is probably not a big deal in comparison to losing your whole computer. Still, it may be yet one more reason for Windows 7 holdouts to sit back smugly as they watch the Windows 10 crowd suffer from yet more problems – some of those same Windows 10 users who told them over and over again about how not “upgrading” to Windows 10 would lead to all the most unimaginably bad circumstances.