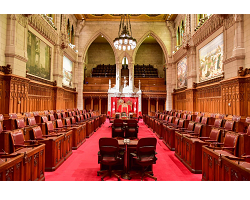 A report is suggesting that the Liberals are hoping to get a Summer session for the senate to continue where they left off.

Late last month, we reported on how the Senate adjourned without passing Bill C-10. At the time, the senate simply sent the bill to committee for further study. That dashed Heritage Minister, Steven Guilbeault and the Liberals hopes that they can get the speech regulation bill rubber-stamped and passed before the Summer break. With all the parties going on cross Canada tours with big spending promises (along with some MPs announcing that they aren’t running in the next election), an election seems all but a sure thing. Because of that, Bill C-10 is all but dead. This is because if an election is called, the bill dies on the order paper, forcing the process to, at minimum, start all over at the very beginning.

Of course, as we mentioned in the report, Prime Minister, Justin Trudeau, mentioned in the press conference at the time that he was “in talks” with the senate after it adjourned. For what reason, we didn’t know because the media didn’t ask for further elaboration at the time. Still, it left the impression that the Liberals aren’t done with trying to resurrect online speech regulation.

Now, we are learning about what those talks might have, in part, entailed. It seems that the Liberals are pushing for a Summer session in the Senate to get what was not passed through. From the Globe and Mail:

The day after the Senate adjourned, Prime Minister Justin Trudeau said the government was in discussions with the Senate leadership about recalling the chamber. Then on Friday afternoon, Senator Marc Gold, who represents the government in the Senate, released a proposal to recall the Senate to deal with C-6, but not C-10.

“Since we adjourned on Tuesday, June 29, it has become increasingly clear that an inability of the Senate to complete its study of this legislation before the fall has generated a great deal of concern, anxiety and frustration for those in our LGBTQ2 community,” he wrote.

The proposal would see the Senate recalled as soon as possible in order to approve a study of C-6 by the Senate’s legal and constitutional affairs committee, with a deadline of no later than July 26. The Senate would then reconvene and hold a final vote by July 30 at the latest.

The push to get a Summer sitting appears to be mostly about getting a different piece of legislation through. With Bill C-10 in the Senate committee, it would have to be quite a long extra sitting just to get the legislation through committee and voted on after. Then again, Bill C-10 should have been stopped dead in its tracks when the House of Commons speaker voided the secret amendments – yet it passed the House of Commons at 1:30AM two days before breaking for the Summer. Then, when the legislation made it to the Senate, senators agreed to extend the sitting days in an effort to pass the legislation. Luckily, that wasn’t enough to save the legislation. Still, we’ve seen the nearly impossible almost become reality in this debate before.

At this point, we have to wait and see if the Senate gets recalled somewhere along the line this Summer. If that happens, if the Senate will even touch the speech regulation bill or let it sit in committee (hopefully and should be the case). Still, if this debate has taught people anything, its to never underestimate this bills chances. After all, it led to an extremely close call already.