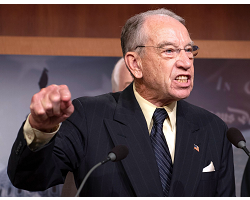 There’s nothing wrong with Section 230. Lawmakers like Chuck Grassley, however, are a completely different story.

For the last couple of years now, Section 230 has been the subject of attack from both sides of the US political aisle. From former US President, Donald Trump, trying to defund the military because a moderator dared question his outright lies about election fraud to current US president, Joe Biden, wanting to “review” Section 230 because social media might contain some misinformation, the section of law has been a major talking point for some time.

The thing is, Section 230 isn’t the problem in any of this. The lawmakers, however, are a different matter. This has required experts on the field to constantly have to refresh people on what Section 230 actually is. This is because what the law actually is and what it actually does very quickly gets lost in the shuffle of political talking points and outright mischaracterizations.

No provider or user of an interactive computer service shall be treated as the publisher or speaker of any information provided by another information content provider.

That’s it. That’s the whole law. There is nothing about content moderation, misinformation, anonymous speech, “big tech”, or almost everything else that seems to continuously crop up in these debates. All it does is say that things like websites are not responsible for the users speech. That responsibility falls on the users themselves. While it did help shield websites from a number of lawsuits, that shield is actually necessary to this day. In fact, the law is actually common sense. As such, to this day, there is not a single thing wrong with the law.

Yet, lawmakers continue to insist that Section 230 is the problem for all of society ills. The debate has spiralled so far out of and basis of reality, even media outlets have effectively been caught spreading misinformation in the process. Despite experts repeating actual facts until they are blue in the face, the misinformation and false perceptions of the law continue to persist – typically by people who clearly have no clue what they are talking about.

One particularly good example of what is so drastically wrong with the debate comes from Republican lawmaker, Chuck Grassley. In an interview we happened to stumble across, he seems to think that because sites like Google and Facebook exist, there is no need for Section 230 anymore:

Kimberly Adams: You are one of the few people still working in the Senate who actually signed the original piece of tech legislation more than 25 years ago, the Communications Decency Act, which included that infamous Section 230. How do you think that law still holds up today?

Grassley: The purpose has served a very good purpose. And that purpose is new ideas in 1996. And new instruments of communication, and that they needed some protection, because we thought they were so good — and we’re talking about before the words Google, Facebook, Twitter, were ever known, those weren’t words, then — to help them get started. Now that they have come to the monopolistic point of view, and control that they have, and influence they have, it seems to me it’s time to either do away with 230, or to modify 230.

Adams: How would you like to see it modified?

Grassley: I think I’d rather see it done away with.

It’s really difficult to even know where to begin with. You honestly have to wonder if the Senator was asleep the whole time they were discussing the law because the level of understanding of the law in these comments suggests that he knows so little about it.

First of all, these comments falls into the trap of thinking that Facebook, Twitter, and Google are the entire internet. This perception is, of course, flat out wrong. Anyone who things the entire Internet is either Facebook, Twitter, or Google (or even a combination of the three) has no idea how the Internet works these days. The Internet itself is home to billions of websites with pretty much any interest known to exist being covered to varying degrees. It’s a bit like saying that the entire known universe is just Earth, the Sun, the Moon, and Mars and you know everything there is to know about it. The only rational response is, “Uh, no.”

Second of all, the very idea that using the existence of Google and Facebook as a reason to ditch Section 230 is an absolutely terrible reason for ditching the law. This type of thinking paves the way for the government picking winners and losers in the online market ecosystem. It’s about as big government as it gets. If you are concerned about the overarching power Facebook and Google has, removing legal protections is only going to serve to solidify their dominance and make it even more impossible for newer players to emerge into the Internet scene. All you accomplish is eliminate their business competition. That’s all.

Following that up, eliminating Section 230 would have a hugely profound and negative impact on the Internet in the US. It effectively bans innovation online completely. The effects of that is not hard to see. If you are wanting to start an Internet business, the first move is to pull up stakes and move what you can out of the US assuming you live in the US. The economic impact of banning an entire innovative sector would be huge. You’re talking about a loss in tax revenue, a loss in business opportunities, and a loss of jobs and knockon jobs in the process. There is no upsides to this at all.

If the worry is misinformation, the control of the market large tech companies have, or censorship on certain platforms, repealing Section 230 is one of the worst responses you could possibly have. The only way we can think of that would be worse is to make a law saying that Google should be the only search engine operating in the US and Facebook be the only social media platform operating in the US. It really requires creativity to come up with a move worse than repealing Section 230.

Of course, all of this is logic and reasoning here. Sadly, logic and reasoning has been in critically short supply for more than two decades in the world of US lawmaking. Attempts to inject such logical thinking has typically been met with disdain or is simply ignored altogether. As such, there’s not a lot in the way of preventing the US from marching closer to the abyss with patriotic chants and cheers. It does look like this is the American way whether you like it or not.