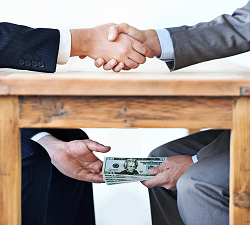 Documents have re-confirmed that user generated content was being regulated at the behest of lobbyists when the bill was known as C-10.

It’s no secret that Bill C-11 is primarily a lobbyist driven bill. Established corporations in Canada have been calling on the government for years to regulate user generated content in Canada to death. Since it is the Liberal Party in power, the government is only interested in those willing to hand them the biggest envelope of cash. If lobbyists are demanding that the Canadian government murder an entire industry, the government won’t really think twice no matter how many Canadian’s lives it ruins.

This blatant level of corruption has been on full display for years now. In fact, it was May of last year that it was revealed that the then called Bill C-10 was the result of heavy lobbying by traditional broadcasters and publishers. Those lobbyists have long viewed the average YouTuber and TikToker as little more than the competition. If they can just end everyone’s career, then the competition has been eliminated and they would once again go back to the era where they had a captive audience. Specifically, the lobbyists were pushing for the removal of both Section 2.1 and 4.1, ensuring no one would ever dare create content they don’t control ever again.

New documents are, once again, confirming that Bill C-10 at the time was, indeed, a lobbyist pushed bill. In fact, those documents were not shy at naming who was actively trying to destroy freedom of expression and the open Internet. From the National Post:

The government documents indicate why the Liberals may have chosen to remove the exemptions. They cite the Coalition for the Diversity of Cultural Expressions (known as CDEC in French), a group representing Canada’s cultural sector, including television, film and music.

“Notably, the CDEC and its members have proposed that all exclusions be removed and that the CRTC be enabled to determine what should or should not be regulated on social media,” the document says.

It also cites advocacy group Friends of Canadian Broadcasting (now renamed to Friends), which “proposed that the users of social media services be excluded from regulation, but that the platforms themselves be regulated, allowing for conditions on advertising standards, discoverability and data gathering.”

The document says stakeholders had three main concerns. “First they argue that some content available on social media platforms directly competes with broadcast undertakings,” particularly music on YouTube, which “could be considered the largest music service.” The stakeholders were also concerned that the exclusion means the CRTC wouldn’t be able to “collect data and information from social media services.”

“Finally they argue that as social media evolves and other platforms evolve, some novel activities and services could be excluded from regulation by default which could lead to future gaps in broadcasting regulation.”

The section of the document outlining options for the government is redacted. The document dates from the time Steven Guilbeault was heritage minister; he has since been replaced by Pablo Rodriguez. Rodriguez’s office didn’t directly answer when asked whether the government removed the exclusions in section 4.1 based on stakeholder recommendations as outlined in the document, or whether it removed them for another reason.

It’s really not a surprise that the process was just corruption all the way down. It was very clear that lobbyists were writing the bill, then lining the pockets of politician’s to ensure it gets top priority. No one in the user generated content sector ever asked for the bill or even what the “goals” were of the legislation. Yet, here we are today with one of the biggest government threats to their whole livelihoods ever – seemingly out of nowhere at first.

When the legislation came back as Bill C-11, many Canadians in this sector naively believed that maybe this legislation came about as a fundamental misunderstanding of how the Internet works. Some appeared before committee to try and explain not only how the Internet works, but also why such a bill would be detrimental to their careers and all the economic benefits that comes about with that. Many were surprised that their calls for reason was met with personal attacks and harassment by government officials. Experts did step in to further explain the positions and why the concerns were valid only to be met with personal attacks from those same officials.

Others who followed, trying to plead their case wound up realizing that the committee hearings were nothing but a sham process. One openly commented about how disillusioning it all was. It became widely known that lawmakers had no interest in understanding the topic at hand. Instead, they just wanted to hear that their bill is perfect in every way and that it should be passed immediately – no matter what the reality would say.

By that point, it was clear that the whole intention of the bill was to ruin the careers of thousands of Canadians who took a chance and struck out on various platforms to see if their content would receive a wide audience. Their success was viewed with disdain and disgust. Their mere existence, for the government and their lobbyist handlers, was an obstacle that needed to be eliminated rather than a story to be held in high regard and celebrated. There is just no bargaining or reasoning with that kind of mentality.

So, with the word that lobbyists have been pulling the strings from the early days is no surprise either. We’ve known how horribly corrupt the process was, even back then. The idea that precious little would separate government talking points and the demands from lobbyists is equally unsurprising. If anything, it is exactly as expected.

Probably the only thing interesting in the documents is the fact that some of those lobbyists were interested in simply separating platforms from user generated content. That, of course is an impossible task given how intertwined users are with not only the platforms themselves, but also the advertising model that traditionally benefits the larger players. This notion came about through an ignorant view of how platforms work. The government, in their talking points, simply took that talking point at face value and ran with it without the slightest interest in understanding how platforms and the Interent even works in the first place.

Right now, the Canadian Senate is scheduled to come back on September 19th. So, we still have about a month and a half of reprieve, knowing that freedom of expression online is temporarily safe up until then. From there, it’s anyone’s guess as to how quickly the senate will move. The current hope is that the Senate will actually do its job and examine the bill and the implications, though we’re not really sure that logic and reason will carry the day. Enjoy the Summer while it lasts, because things might get ugly come the fall on this front.