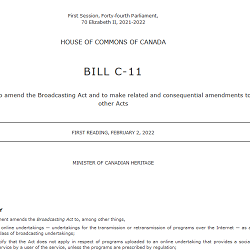 The great Canadian internet and speech crackdown has already started. Work on pushing Bill C-11 through has already begun.

The first senate sitting day isn’t scheduled until September 19th, but it looks like the crackdown on the free and open internet can’t wait. A report is surfacing saying that early sessions have already begun to move the massive social media censorship bill forward. The senate transport and communications committee is reportedly going to convene to debate the hugely controversial Bill C-11 legislation known for it’s massive crack down on freedom of expression on social media. From The National Post:

They’ll get started early, under a deal reached by the various Senate groups. The Senate transport and communications committee will begin meetings before Parliament returns from summer break the week of Sept. 19, with the goal of wrapping up work in November, senators told the National Post.

“It’s a controversial bill. And yes, there will be amendments, I’m sure,” said Sen. Julie Miville-Dechêne, who is part of the Independent Senators Group.

Senators on the committee were reluctant to specify what kind of amendments they might bring forward, saying they didn’t want to pre-empt the committee’s study.

Over the last few days, there has been questions about how the governments attempted crackdown on the open internet would be impacted by the recent racism scandal. This over top of the threats of retaliatory tariffs by the United States government because of the discriminatory nature of the legislation as well as obvious violations of Canada’s trade obligations. Indeed, the threat of the legislation sparking a trade war with the US would, theoretically, act as a deterrent.

Now, we are learning that it might not be the deterrent it should be. With the Canadian government starting in on the debates and getting a so-called “study” under way early, it is a signal that the Canadian government is flipping the bird to the United States and Canadians who know what the bill actually represents. The Liberal party appears to be moving ahead, shoulder to the wheel, advancing this internet crackdown as quickly and as secretively as possible.

Now, digital rights groups are hoping that, unlike the House of Commons and their respective committees, the Senate level would actually be open to listening to the concerns of Canadian’s. They have pushed a letter writing campaign in an effort to put pressure on the senate to, at least, remove provisions that are obviously unconstitutional. I, personally, participated in this effort in an effort to support this initiative.

At the same time, I am skeptical that the senate will actually listen to reason enough to realize what an atrocity they are about to unleash onto the country through this bill. Prime Minister, Justin Trudeau, and the Liberal party with the backing of the donor class, holds a lot of sway in the political process. As such, I’m not convinced that the senate will have the spine to either stop the bill or stop its most horrible provisions. If anything is going to put a stop to this, I’m convinced it’s going to be a lawsuit after this abomination receives royal assent.

From a wider perspective, though, this is probably not a good sign for the broader internet. Indeed, Bill C-11 only focuses on cracking down on free speech on large platforms like YouTube. As most of you know, there are also other bills on the horizon like Bill C-18 (link tax legislation) and the online harms proposal (forthcoming). The fact that the government has jumped the gun like this on one part of its massive crackdown on the internet does make it plausible that the timeline for the other dangerous bills could be accelerated as well. That is bad news for everyone involved.

For what it’s worth, I’ll continue to bring you the latest coverage for as long as possible. If this really is the beginning of the end of Freezenet (along with the rest of the Canadian open internet) as the government cracks down on the internet bit by bit, I’ll do what I can to keep the lights on and inform you of the latest developments until I am forced offline. I hope it never comes to that, but the direction things are already going at this point gives me reason to preemptively say this. My goal has always been to inform the public of the latest happenings on the internet and these developments aren’t going to change that.